You are here: Home / Features / Featured Articles / Oblique Connectors For Your 3D Diagrams

Visio network shapes have gone “3D”, but Visio connectors have decidedly not…

…unless you’re the guys behind the creation of the Zeus ZXTM Appliance Network Stencil. Several readers have noticed the cool isometric connectors that the KnowledgeHub guys used in their sample illustration, and want to get ‘hold of ’em.

We’re not sure where the KH folks got those connectors, but a little light bulb went * bing * inside our Visio Guy heads as we remembered yet another an unfinished prototype gathering dust on our HD. Ah yes, Oblique Connector.vsd, from long, long ago…

Yes, we dug-up and dusted-off the old prototype and produced a finished shape that lets you connect 3D, or isometric looking shapes with connectors that match. In today’s download, you’ll find this master:

Which lets you create illustrations that look like this: 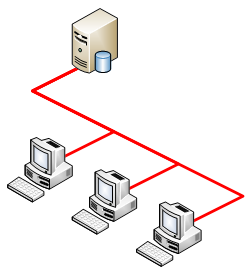 If you right-click on the connector, you’ll see a BUNCH of options: 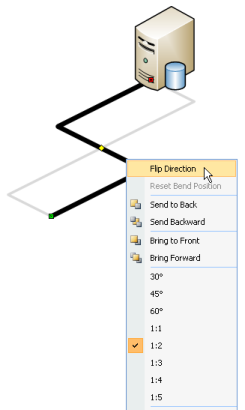 Let’s briefly go over the menu items and other features of the shape:

The first menu item is Flip Direction. This changes the “S” orientation of the connector by 90 degrees (in our projected world…) In the illustration above, you can see the light-gray line represents what the black line would look like after this flipping operation.

The items are self-explanatory, but the point is this: it’s easier to send the connector behind the computer, then to try to adjust connection points so that they’re just on the edge where the connector meets the shape.

Visio’s snazzy 3D network shapes appear to be drawn as true isometric projections. That means their lines run at 30° from the horizontal. So our connector should technically use the 30° setting to match the angles of the network shapes. We’ve found, however, that the setting 1:2 is very close to 30° (it’s 26.6°…) works very well, because it’s easier to position the network shapes in 1:2 increments by snapping to the grid.

Normally, as you connect shapes in Visio, you get that neat-o red rectangle that indicates you’re making a dynamically glued connection. With dynamic glue, a connector will automatically wander around the perimeter of a shape, finding the best place to which to connect.

We tried to implement this feature on the Oblique connector shape, but it just wouldn’t work. It seems that Visio’s Dynamic connector gets lots of special treatment from the engine. This treatment had the effect of hammering our carefully crafted ShapeSheet formulas and making the connector do scary things.