If you like Microsoft’s ecosystem of devices and software, then you’ve been waiting for a new Lumia handset for a looong time. Well the wait is just about over, and the only questions remaining are: 1. Are they too expensive? and 2. Which one is the right size for me?

There, that sounds serious enough that your boss won’t think you’re “just browsing the web”.

If you’re interested in these phones, check out reviews from Windows fan and blogger Paul Thurrott, windowscentral, and ArsTechnica.

Caution: Amazon affiliate link minefield ahead! We’ve got to pay the rent too!

I’ve had this idea for a long time of printing out life-size images of mobile phones to see if they really fit in my hand and pocket. The idea originally came to me a few years ago when the Samsung Galaxy Note appeared on the market–the idea of having a pen-enabled monster phone always on my personage was quite intriguing, but I just couldn’t get excited about Android.

Now that my Nokia Lumia 920 is just about ready for the “guest phone” box on our bookshelf, I’ve finally overcome inertia. Today I created a Visio template for comparing the sizes of the new Microsoft Lumia 950 and Lumia 950XL smart phones, which are just about to be released. You can download it at the end of the article.

The idea is fairly simple:

Once you’ve got one open, just print it out. Make sure you don’t have any “fit to page” or scaling options checked in your print settings: 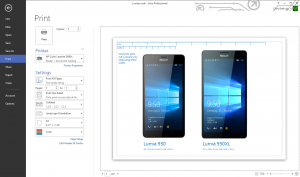 Once it’s printed out, verify the accuracy by placing a ruler next to the inch or centimeter scales that I’ve provided on the page: 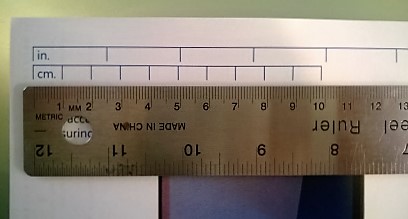 Here, I’ve lain my Nokia 920 next to the printed out 950s. There isn’t a huge difference in sizes, but the screens are quite a bit larger, and resolution is way more (these suckers have 2560 x 1440 screens!) 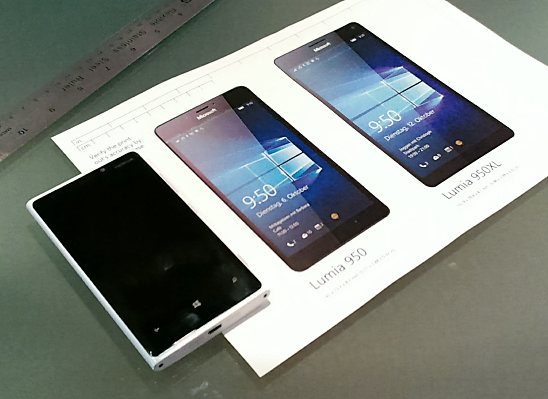 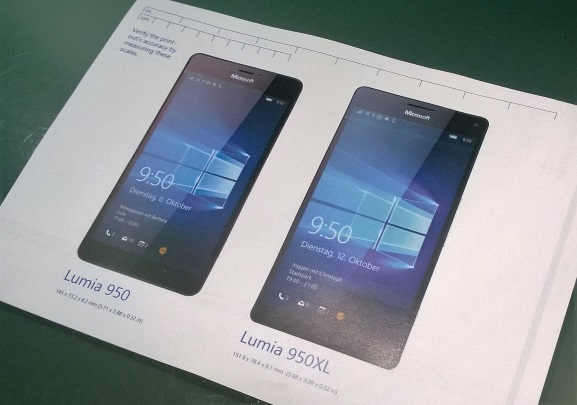 In hand, it’s even harder to tell the difference. Visio Guy has fairly large hands. 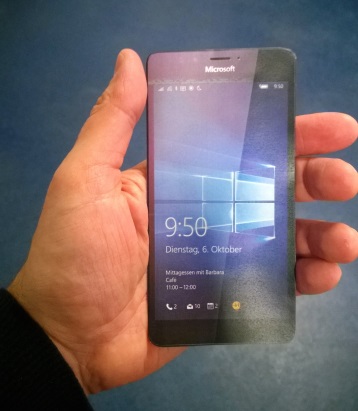 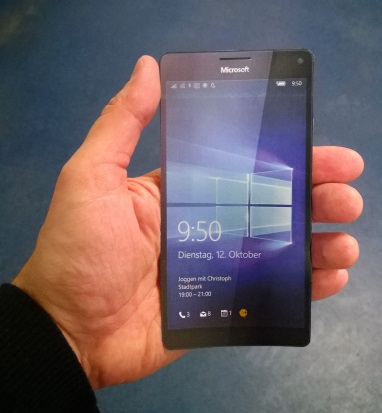 With both phones, I won’t quite be able to reach all points on the screens with my thumb. Perhaps with an awkward stretch, but even on my ol’ 920, this sometimes registers a touch from my thenar. So for some operations, it will definitely be a two-handed affair. But the phones are by no means unwieldy for my hands.

To really get an idea for how these phones will feel, I recommend gluing them on to a couple of sheets of cardboard. The phones are both about 8.2 mm / 0.32 in thick. I didn’t have the time to do that today, though.

I probably should have used 3 sheets of cardboard, which would have made them 9mm, but I figure that the rounding on the edges will make them sit thinner in the hand, so I’ve settled for 6mm-thick prototypes.

If you’re not into wasting trees, have a look at the site phonearena.com, that I stumbled upon while searching for device dimensions. They’ve got a nifty size-comparison feature, and will even help you calibrate your screen so that it is displaying the actual phone sizes accurately! 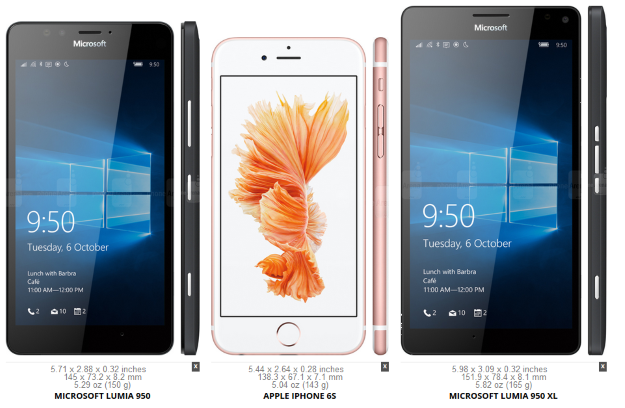 Beauty is on the Inside!

Okay, most mobile phones are just dull rectangles, and anyone that nitpicks about style and design of a slab is…well…nitpicking!

But inside is a wonderful mess of printed circuits, chips, sensors and GLUE! Have a look at this dis-assembly video over on winfuture.de:

It’s pretty interesting to see all the stuff inside the phone, but the computer-generated narration will drive you crazy. “Remove the gasket from the back-khe guvver”…