You are here: Home / Development / Make Your Text Stand Out! 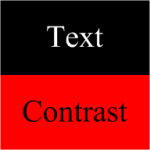 I’ve been wondering this because I wanted to know, quantitatively, why I sometimes need white text and other times need black text in order to make a shape readable.

If you are designing shapes that use lots of color, or that are intended to be used with Visio 2007’s color-by-value data graphics feature, you might be wondering the same thing.

And if you are looking to construct a ShapeSheet formula that automatically selects a text color based on the background color of a shape, then you might really be wondering about this!

Well recently, I stumbled upon a solution!

The Answer Isn’t Black and White

If you’ve messed around with color components, or even clicked on More Colors… in one of Visio’s numerous formatting drop-down lists, you’re likely to have run into the idea that colors can be constructed, using the RGB color model.

Using RGB, a color is built from three values of red, green and blue. Each value can range from 0 to 255, where 255 is the full value of the color.

This is pretty simple, especially if you have something to look at. Below, you can see that the colors get darker as we decrease the values. If all the r, g, b values are identical, we get a shade of gray ranging from white to black. 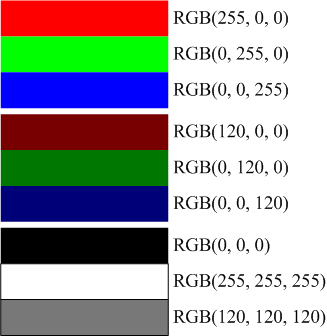 With this little bit of RGB knowledge in hand, it seems that we could simply pick a cut-off value to determine Darkness or Lightness. But unfortunately, it’s not that simple.

Below, I’ve illustrated three shapes, each having the full brightness of red, green or blue. We can see that the red and blue are arguably Not Bright: 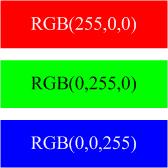 Thankfully there is a God(s), the Internet, Google, and other people with brains…and difficulties. For example, the W3C has studied this issue, with accessibility for those with visual disabilities in mind.

I recently browsed upon a wonderfully informative article by Nir Dobovizki, over at NBD-Tech. The article: Calculating the Perceived Brightness of a Color, explains in depth the issues behind Brightness and Darkness, the various methods used to calculate it, and other interesting background information.

In the end, Nir proposes his own variant of a brightness formula that I found worked well, and was easily converted to a ShapeSheet formula:

where R, G and B are the red, green and blue components of a color, respectively.

The formula looks very similar to Pythagoras’ formula for a hypotenuse, but in three dimensions. The coefficients are there because our perception of red, green and blue is not uniform, as I demonstrated before.

The brightness formula returns a result between 0 and 255. If the value is below a certain level, then the color is deemed Dark. Otherwise There Be Light. Nir suggests a value of 130 as a cut-off.

Thanks for all the help, Nir!

After reading Nir’s article, I fired up Visio, drew a rectangle, whipped open the ShapeSheet and added a User-defined cell with this formula:

Note: I added the line-breaks to the formula for readability. You won’t get away with this in the ShapeSheet!

Anyway, this ShapeSheet formula analyzes the value of the FillForegnd cell, which is generally holds the color of a shape. If a shape were to have a fill pattern, then we’d have to deal with FillBkgnd as well. But the pattern will also add to your contrast problems, so let’s not worry about that right now.

Using Visio’s ShapeSheet functions: RED( ), GREEN( ) and BLUE( ), the FillForegnd color is broken into RGB components, analyzed for brightness, and compared to a cut-off value.

Based on the IF-result, one of two text colors is returned. If the expression is False, then the color is Dark, and the first color is returned: RGB(255,255,255), which is white.

If the expression evaluates to True, then the color is Light, and the second color is returned: RGB(0,0,0), which is black.

Once our ShapeSheet formula was accurately distinguishing light from dark, we could then link User.txtColor to the cell that determines a shape’s text color: Char.Size, like this:

The cut-off value of 130 is open to interpretation. And since it lives in only one place in our formula, it is easy to change.

I then created a bunch of matrices with many background color to see how the 65 shapes compared to the 130 shapes. You can see the results below. I flipped one column of shapes so that you can more directly compare them to the other.

I actually like the results for 65 better than for 130. As you would guess, 130 leaves a lot more white text than does 65, since it sees the world as a darker place, so to speak.

I think the final test would be to see how the test patterns print on various printers.

Excercises for the Reader

To make sure you’re all still awake, and not sleeping in class, I thought I’d propose some further tasks that might help reinforce the concepts we’ve discussed today.

Expose the cut-off value in the user-interface

Since the perception of light and dark is somewhat subjective, you might want to expose the cut-off value so that it can be easily changed. See if you can link that “130” value to a Shape Data (Custom Property) field. Then you can easily change it using the Shape Data window (accessible via the View menu)

If you think I drew all those squares by hand, and colored each one individually, then as my dear old Dad would say; “You’re NUTS!” I wrote some VBA code to handle this automatically. All I have to do is select one of my smart-text-color Visio shapes, and run the code. The shape gets copied a bazillion times, and gets fitted with a new color, automatically!

Hint: Visio has ShapeSheet functions for decomposing colors into RED( ), GREEN( ) and BLUE( ) values. But you can also compose a color using the RGB( ) function.

Let us know how you do with the exercises. There are inviting, empty comments fields waiting at the end of this article for your input!

If you’d like to share your inventions with the Visio community, feel free to send them to us at:

Maybe we can feature them in up-coming articles!