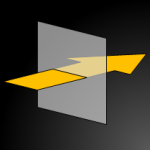 Today I saw a question in the Microsoft Visio newsgroups.

Stefan wanted to know how to make a 3D arrow look like it was going through a rectangular plane.

Of course I couldn’t resist the opportunity to do some drawing, plus it seemed like a nice topic for today’s Visio 3D drawing tutorial!

If you’ve perused the Visio Art page, you might have seen this Pin and PinLoc illustration: 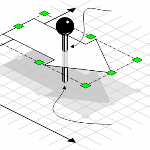 or perhaps the Knife Through Iron Chef piccie: 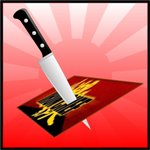 Both of these visuals have elements of what Stefan needs.

So it’s possible to do this with Visio, but how?

I like to draw using Visio’s grid, which you can turn on via the View > Grid menu. Armed with the grid, some settings under Tools > Snap & Glue, and the Line tool, you can do a good job of drawing consistent “isometric” shapes, as long as they are fairly simple.

Here I’m creating the first part of our 3D illo: the square, or plane through which the arrow will pass. I am using “isometric” lines that have a slope of 1/4. Not really isometric, but easier to draw using grid snaps, and it looks pretty three-dimensional: 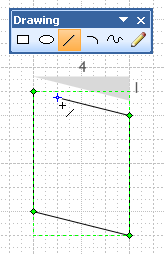 To create the arrow, I used a slightly different approach, because I found it hard to visually draw all the sides of the arrow, and maintain that 1:4 slope.

This is going to look weird for a few paragraphs, so bear with me. It will all make sense shortly.

Instead of painstakingly trying to draw each vertex, I just created one single “1 to 4”  line. Using Ctrl + Left-mouse-drag, I quickly duplicated it a bunch of times, and placed them parallel to each other to form the lengthwise regions of the arrow.

Then, I flipped a few copies of the line horizontally ( using Ctrl+H ) and placed them at the points where the tail, point and head of the arrow would be.

The resulting grid doesn’t look like much right now, but you’ll see that it can easily be turned into a 3D arrow:

…That We May Preserve the Union

Once I had that grid, I could quickly perform three steps that got me closer to an arrow: 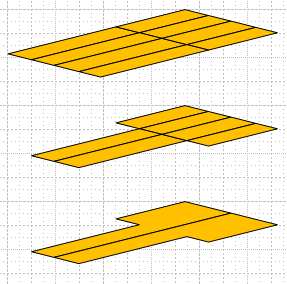 It’s starting to make a bit more sense, isn’t it? That almost looks like an arrow! By the way, I hope you are starting to appreciate power of Visio’s Boolean operations (located under the Shape > Operations menu!)

So now we need to “de-hammerhead” our “arrow”. We can do this easily by deleting two vertexes.

We’ll need our Line tool (Pencil tool also works) again to do this. With the line tool, we can select the vertexes at the outer edges of the hammerhead and delete them.

Now all you have to do is select both sides and Union them into one, single piece.

See, I told you it was an arrow!

To the 3rd Dimension and Beyond!

Now that we’ve got an arrow and a plane, how (on Earth) do we get it to look like it is poking through the plane?

Sending to Back or Bringing to Front (Shape > Order menu) doesn’t seem to help us very much:

Because parts of the arrow are in front of the plane, and parts are behind. So we need to operate again. Yup, get your scalpel out, our arrow will require further surgery.

Hopefully you’ve saved a few copies of those fake isometric “1 to 4” lines from earlier. Here I’ve copied one to the position where I guess the arrow hits the plane: 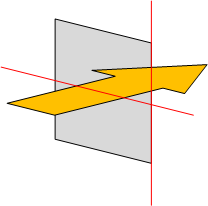 I’ve also added a vertical line at the right edge of the plane. These two red lines will be used to cut our freshly-union-ed arrow into pieces:

Once we’ve fragmented, we can delete that extra bit that shows up as a result of where the red lines intersected.

Another tip: to preserve the orange fill in the fragmented shapes, make sure you select the arrow first, then the red lines. It goes like this:

The resulting shapes will have the line, fill and text attributes of the first-selected shape!

Using Ctrl+Shift+B, we can quickly send the middle bit of the arrow to back, so that it is obscured by the plane:

Make it Really Stand Out

And for further effect, add transparency to the plane, so that the middle of the arrow shows through just a little bit. Transparency can be set under the Format > Fill dialog.

There you have it! A fairly simple-to-create, yet realistic, 3D illustration. All done in Visio, so you don’t have to go out and buy Adobe Illustrator!