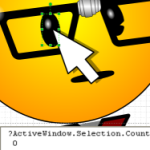 A coding problem that Visio developers often stumble upon recently reared its ugly head yet again in the newsgroups. The question, very simply, was:

How do you programmatically detect sub-selected shapes?

The usual place to start is with a simple line of code, like:

But as it turns out, this line surprisingly does not return sub-selected shapes. So let’s dig deeper into the problem so that you can get your projects finished!

For the uninitiated, normal selection is the simplest, most-encountered case, and it looks like this when you select only one shape: 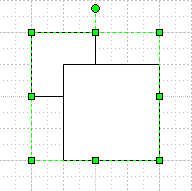 We can see that this shape is a group that contains two squares. If we click again on the smaller square, we will see slightly different selection handles: green boxes, each with a little x in the middle. This indicates that you have selected a shape within a group, i.e. you have sub-selected the shape: 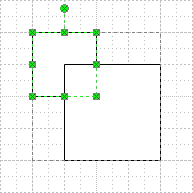 But when it comes to coding, or seeing things from an internal, Visio-engine point of view, there is a third notion of selection: Super-selected shapes.

If you look closely at the sub-selection illustration above, you might make out a black dashed line surrounding the group. While you might only care that you have sub-selected the little square, Visio is still keeping track of the parent-group. In Visio geek terminology, this parent shape is Super-selected.

So when it comes to programming Visio and dealing with selections, keep the three modes of selection in mind: Selected, Sub-selected and Super-selected!

Tweak the Selection Object With IterationMode

It turns out that we can finely-tune which selected objects we want to know about by altering the IterationMode property of a Visio Selection object. The ItereationMode can have a combination of four values, enumerated in the VisSelectMode enumeration:

By default, a Selection object has an iteration mode of:

which explains why we don’t get any sub-selected shapes in a default selection – the argument says to skip them!

To get the result that many of us are probably looking for, namely normally-selected shapes and sub-selected shapes, we would use an IterationMode of:

This is the mode that is commented as “get all shapes together” in the code listing below. The idea is that we want a selection object that contains all of the shapes that a user specifically clicked on. Super-selected shapes are ignored, since I don’t think a developer cares about them all that often.

Below is the code listing for the VBA code that is in the download at the very end of this article. The code requires a button and a text box. When the user clicks the button, a string containing information about the current Visio selection is returned by m_detectAllSelectedShapes. This string is then pushed to the text box control.

The function m_detectAllSelectedShapes returns overlapping results. First, it separates normally-selected shapes from sub-selected shapes, then it puts them all together at the end. So the resulting string can have up to three different lists.

Just look for where sel.IterationMode is set to see the differences.

Again, to be technically complete, there should also be information about super-selected shapes returned by the code above, but I don’t think that is information that most developers are interested in. The main concept is to be able to detect sub-selected shapes.

You can play with this code in a ready-to-go format by downloading the following Visio document: