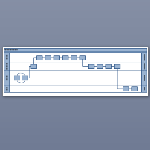 If you use Visio to make very long and wide swimlane diagrams, then you may be frustrated by the fact that Visio’s lane-headers only appear at one end of the lane.

By the time you get to the other end of you cross functional flowchart, you forget who’s responsible for what, and why a shape is in a particular band.

Well, today we’ve got a download that will help you fix this problem!

Before we get started, let’s all chime in with a big, fat, Visio Guy Thank you! to JDesmarais who asked about how to get headers on both ends of swimlanes in the microsoft.public.visio.general newsgroups, back on September 25th!

The built-in Cross Functional Flowchart templates don’t have a way to do this easily. And Visio has no “Freeze Columns” feature like Excel…because…well let’s just say its a different paradigm.

So I’ve solved the problem by modifying the Functional Band master, and including it in a template that you can download at the end of this article. When you fire-up that template, you’ll get a brand new horizontally-oriented Cross Functional Flowchart, that already has a title and a band just waiting for you to modify: 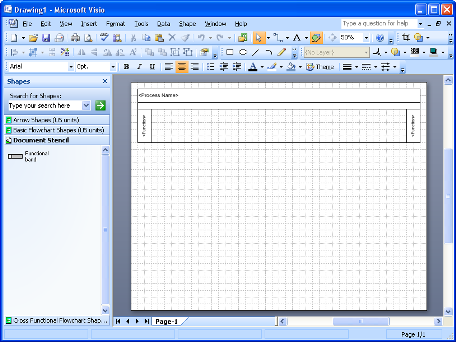 You can just make out that there are headers at both the left and right ends of the band. Cool! All your flowcharting friends only have band headers at the left end:

Once you get down to flowcharting with your New! Improved! template, you’ll add bands, you’ll add flowchart shapes, and you’ll stretch the page to some ungodly horizontal dimension in order to accomodate the whole mess. You might even play with Themes to make it look pretty.

If you zoom way out, you can see that sure enough! There are headers at both ends: 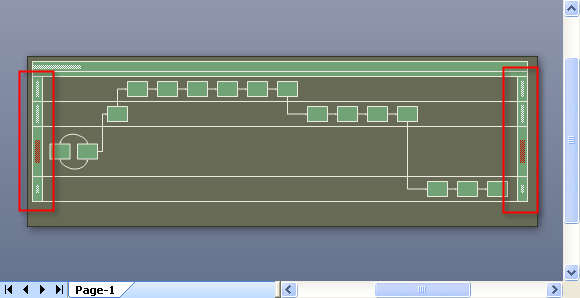 But the text is still hard to read. So let’s try another trick. You can make two windows into the same drawing page by going to Window > New Window. 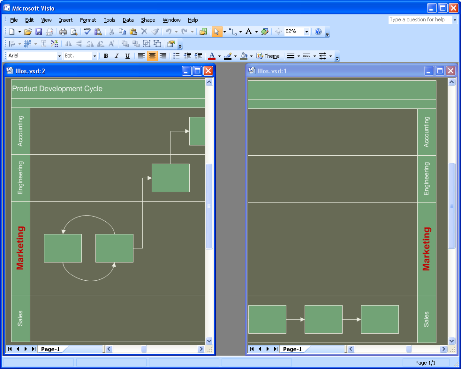 If you change the text on a swimlane in the left window, the heading on the right end will change as you type. You can change the font color, style, size, etc. and the right header will do its best to match the left. This makes a cool demo for the guys sitting next to you, and will establish your prowess at using Visio. Yes Sir, things are looking up for you!

Now that right header is a bit of a parrot, I must admit. It mimics what’s on the left side. That’s it. You can’t make changes to the right headers, just the left ones. But since you’ll likely be flowcharting from left to right, this shouldn’t be much of a problem.

The template that you can download is called: Double-headed CFF Horizontal (US Units).vst. You might have wondered about the words Horizontal and US Units. US Units, also known as Imperial, just means that this template is made for Letter-sized paper, and uses inches as its measuring system. If there’s enough demand, we’ll try to get Metric version out, so vote in the comments below!

Because of the trickiness that Visio pulls when you start a cross functional flowchart, i.e., THIS DIALOG: 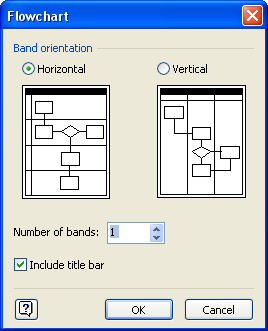 I needed to make an  explicit “horizontal” template, so that Visio wouldn’t present this dialog, allow you to choose “Vertical”, and subsequently cause problems with my custom double-header band shape. So horizontal shapes are on the page both to save you time and to tell Visio that we’ll be doing horizontal swimlanes today, thank you very much.

So we have units and orientation to consider, which brings up the idea of sequels. Follow-up posts. More free stuff. If horizontal/imperial is not your thing, then you need to vote in the comments below and let us know what type of cross functional flowcharting you are doing. As far as I can see, there are four possibilities, and #1 is already done, so don’t vote for that.

So once again, you can VOTE for what you’d like to see next: