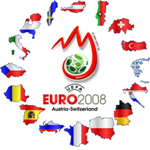 Well Visio Fans, June is upon us, the weather is hot, and the UEFA European Cup 2008 is about to start!

Europe is going soccer crazy, and signs of Fußball-mania are everywhere! As I walk around Vienna, it’s pretty hard not to notice these

waving from store-fronts and car windows.

Of course Visio Guy wanted to get in on the football action, so we’ve drummed up some rabble-rousing, chest-pounding Visio shapes to fan the flames of nationalistic fervor!

Come on, admit it! Your office has a pool going! And then there’s that shiny new colour printer that just arrived…

Now I know that most of our readers are in the USA, and they are currently more concerned with baseball, hot dogs, apple pie and Chevrolet. But soccer-interest is growing in the US, Americans have heard of David Beckham, and we are annoyed that we showed so poorly in the 2006 World Cup.

But more importantly, Americans, like others around the world, won’t be able to resist the temptation to morph a major tournament into a friendly office competition–and the chance to win free donuts for a week at the expense of their co-workers!

So when you set out to create that Euro Cup chart for your office pool, don’t just settle for drab, boring text boxes like this..

…when you can dazzle your peers with eye-popping, toner-burning graphics like this? 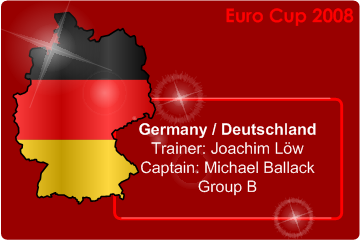 We know the choice it clear, so we’ve conjured-up a set of 16 Visio shapes that combine a country’s outline with its flag. The shapes have a bit of “wave shading” to add a bit more flag-effect, as you can see in the Germany shape above.

And if you are digging those star-bursts, highlights and lens-effects show above, you can get them here: Lens Flare & Highlight Shapes – Bling Bling!

So here are the 16 Visio Country-Flag Shapes for your UEFA Euro 2008 tournament qualifying teams. Each image that you see below is included as a Visio master shape in the download, available at the end of this article

Good luck to you all, and to your favorite teams. We’re pulling for Germany and Austria to go as far as they can, but they’re in the same group, so they won’t be facing-off in the final.