You are here: Home / Visio Content / Shapes / On the Road with Surface Pro 3 Continued 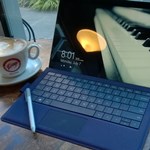 In this ongoing series of posts, I’ll relate my experiences and impressions of life with my shiny-new Microsoft’s new Surface Pro 3 tablet/ultrabook.

This is a continuation of the very-long post that made my blog software choke. Read the previous stuff here: On the Road with Surface Pro 3.

Until now, when resuming from sleep, my Surface Pro 3 has been a bit slow to wirelessly reconnect to the network. I could quickly swipe to Settings, tap Networks, then reconnect to my network, or switch the wireless adapter on and off to get it to reconnect. Or I could just wait for half a minute or so. Either way, the behavior wasn’t very tablet-like when comparing to how our iPads are immediately connected every time you pick them up. 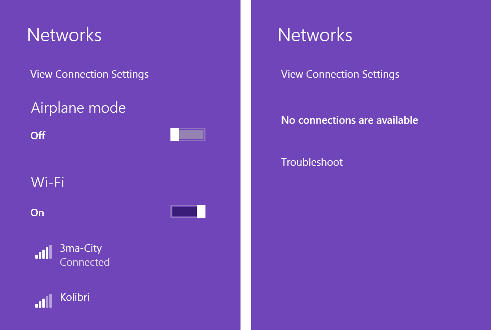 SuperSite for Windows has a post about firmware updates from Microsoft, with lots of user discussion in the comments. I have installed this July 16th update, of course, but the problem just showed up two weeks later! The only things that have changed: I’m now in Munich instead of Seattle, I’m connecting to a different network, time has marched forward, and I’ve probably installed a bunch of other updates on the machine via Windows Update.

When I connect my new, 2 terabyte Seagate Backup Plus Portable Drive, I get some odd behavior.

First, there is this strange error message. It says:

“D:\ This file does not have a program associated with it for performing this action. Please install a program or, if one is already installed, create an association in the Default Programs control panel.”

Second, the Surface seems to keep losing the connection to the drive, then re-finding it.

I’m sitting here watching the Surface to my left, while working on my ThinkPad. The Surface is “doing nothing”, it is plugged in, and the D: drive keeps disappearing and reappearing. I don’t know if the USB port doesn’t provide enough power, or what. If I connect drives to the Surface via a powered USB hub, this does not occur.

This behavior has already messed up the SSD that I had in a USB enclosure, and necessitated many hours of ScanDisk repairs. This is simply not acceptable and will result is scary data loss if I try to run virtual PCs from the external hard drive. I hope that I don’t have a bad USB port, as getting a replacement in Germany for a US-bought product might prove difficult.

I have a bunch of VMWare virtual PC images that are better left on the spacious USB drive. If I can’t use it with the Surface Pro 3, then its use as my travel machine is seriously jeopardized.

Beep. There it goes again! Drive disappears, then reappears!

I am able to copy large disk images over to the Surface Pro 3 from the USB drive. The connection wasn’t dropped when I copied a 21GB Windows 7/Office 2007 image. This makes me think that the problem is power-settings related. If the disk isn’t doing anything, Windows tries to get rid of it, but then the drive alerts the machine that it’s connected or something silly like that.

This is the first time I’ve had two computers that I will really be using to do real work. Before, I’ve used synchronization software to establish an “emergency setup” on my wife’s computer–periodically logging in to my profile and letting all the important files download and synchronize to that machine for that just-in-case scenario that hasn’t happened yet.

For email, Outlook works wonderfully if you configure your accounts using IMAP. Unless something has changed in the last few years, using POP will download copies of your email, and when you move or delete a message, the server will have no knowledge of it. So you end up deleting junk messages on each machine. With IMAP, what you do on one machine is reflected on the other machines, because it’s changing stuff on the server. (Although my iPads are configured with IMAP, they don’t seem to do this properly. Bad Apple software?)

For files, I use SugarSync, which runs constantly in the background. When I took screenshots on the Surface for yesterday’s network problems, I saved them to the Surface Blog folder, then moved over to my ThinkPad, which also has that folder. Within seconds, the screenshots were on the ThinkPad, and I could comfortably edit this post and add the images from the comfort of my full-sized machine. Seamless and painless!

As you know by now, the Surface Pro 3 has a resolution of 2160 x 1440 pixels on a 12-inch screen. When UI elements are based on pixels, and not normalized to a real-world, resolution-independent size, you can get some teensy-weensy menus and buttons.

Here’s a shot of German Visio 2003 running on a Windows XP VMWare virtual machine, next to the normal Windows 8.1 File Explorer. Windows 8.1 allows for the scaling of menus and controls so that newer software will have readable elements on high-res screens. Inside the virtual machine, none of this scaling is present, so we can see the problem clearly: 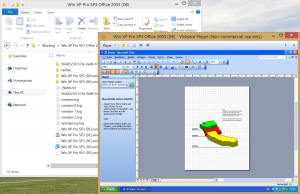 If you have a large monitor, the full size image doesn’t look so bad. I should probably post a photograph with a coin or something to give you more scale. Keep in mind that the text in the File Explorer windows is about 10pt. Compare that to the size of the text in the Visio 2007 window. It’s looks to be more like 5pt or smaller!

Hopefully VMWare has a setting for scaling the virtual machine that I will soon discover!

See what others are saying about high-resolution displays:

So I finally did the work-in-the-coffee-shop scenario at my favorite Black Bean Coffee at Münchner Freiheit.

I ended up getting 298 minutes worth of work done. That’s just shy of 5 hours, which actually seemed long to me. But I’m the nervous type, who usually plugs in as soon as the battery gauge shows 70%.

Of course I didn’t sit in one coffee shop for five hours (only buying one drink…) I put the Surface Pro 3 into hibernation, and resumed work the next day. That overnight hibernation cost 5% of battery life, which equates to about 15 minutes.

Another thing to consider, is that the unit will hibernate when you hit 5%, so you really only get 95% of the battery life to play with. I got a nice warning at 10% that I should plug in soon, then at 7 and 6 minutes, the starts getting panicky with more frantic warnings, then it hibernates at 5%.

Now the claims and even reports that I’ve seen talk about 7 to 9 hours of battery life, so my five hours seemed annoyingly short. Since I like the ‘Pro, I’ll take frivolous stab at rationalization and excuse making:

So I’ll revisit the coffee shop, in a few days, but this time I’ll turn off the WiFi antenna and maybe use a wired mouse (does that use less power than a Bluetooth mouse?)

I will say, this thing seems to run hot for inexplicable reasons. When I play the included Microsoft Sudoku game, the fan will come on and the unit will run real hot. I assume this translates to shorter battery life, but I don’t play Sudoku for five hours at a time, so I can’t say for sure. Now this game looks good, but there isn’t a lot going on. I usually turn the sound down, but there is music playing. Nothing is really moving or animating, but the handwriting recognition is running, because I play with the pen, as though I were doing the newspaper’s puzzle. I usually have no other applications running, save for a browser tab or too, but WiFi is probably on most of the time, with all the various synching services running. 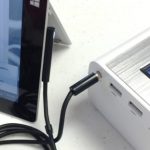 Okay, it looks like this post is getting a bit long, so I’m going to break it up.

On the Road with Surface Pro 3, Part 2