You are here: Home / News / Interview With a Visio Guy 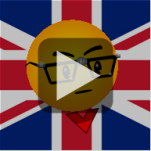 With the exception of radio personalities, I find like to associate pretty faces with people whose words I read, whose work I use, and whose endeavors I benefit from.

Recently, an interview with Visio expert David Parker was posted on Microsoft TechNet.

In the video, David tells some interesting, relevant stories about his history of working with Visio, and he shares some wise, eloquent words on the power of Visio as a visual tool for corporate desktop users, and as a platform for visual solution developers.

Plus, we get to hear him say; drooring!

If you don’t know who David Parker is, well, you should. Here’s a brief list why:

Convinced? The here’s the link to the video: 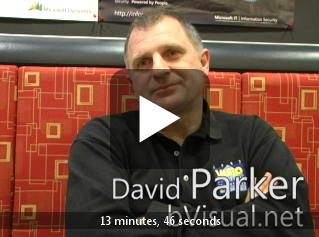 In the video, David talked about his early Visio-days, working with a bank and providing automated layout for a 500-desk office move. On his website, there is a case study about this: Chase Manhattan Bank, complete with snapshots of the impressive diagrams themselves!

If David wasn’t enough for you, I’ve got a few more links to Visio personalities from a recent MVP conference. Mr. Parker uploaded a bunch of photos of Visio MVPs after a conference in April, 2008. And it seems that a few more videos have recently surfaced on MSDN. I’ve included the links to these near the relevant photos below.

Next, we haves David Edson of visibility.net and author of several Visio Guy articles, and Graham Wideman, author of Visio 2003 Developer’s Survival Pack. Not to be “out-David-ed” by Mr. Parker, Mr. Edson can be also be seen live, in action on MSDN, talking about the ShapeSheet and visual reports. And here’s another video of David Edson on Data Visualization with Microsoft Visio.

John Marshall’s has an odd assortment of Visio-related photos and pictures on his Visio Information website.

Although not a source of vis-geek photos, the Visio Guy forum has a nice, sociable thread. In Visio Users Introduce Yourselves! lots of Visio fans have said “Hello, World!”, told a little bit about themselves and what they do with Visio.

And lastly, we have yours-truly in baseball getup: 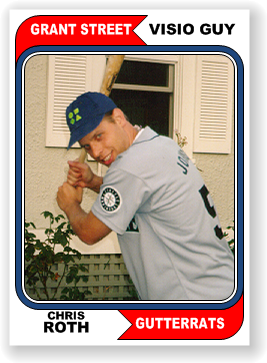 Note: the baseball card treatment that you see here is made with Visio SmartShapes that do some clever things with parameterized corner-rounding, so you can fit them to any format. For baseball card-collecting fans, the style card-style pays homage to the Topps 1974 Baseball Card series.

Note the Visio crew hat (a prized trash-and-trinket in its day), doing duty as a baseball cap: 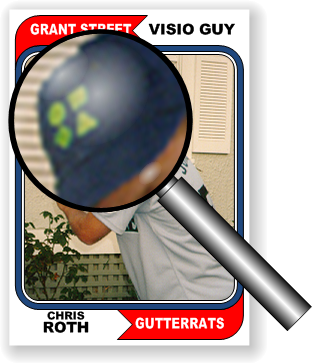 That cap would be a valuable collector’s item today. I think there’s one in the trunk of my car.