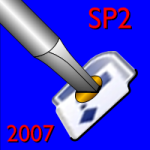 While the major changes and fixes are summarized in that post and on Microsoft’s websites, I’ve reproduced the items that have been fixed in this article.

The service pack contains previously unreleased fixes, as well as all that were released via public updates, security updates, cumulative updates, and hotfixes through February 2009.

Since you’re here already, let’s take a look at the changes, as cited by MS:

You can find out more about SP2 for Visio and for the Visio language pack on Microsoft’s support site:

There’s a lot more information contained in an Excel file which enumerates all of the fixes to each of the Office 2007 applicationa.

If you want to get straight to installing, you’ll find the Visio 2007 Service Pack 2 download here.