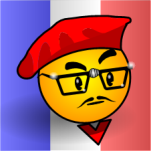 Michel Laplane told me about his relatively new Visio blog a few weeks ago, and I thought I’d share the link with you today.

If you haven’t guessed it yet, Michel’s site is in French. This fact prompted me to fire up the visitor statistics for visguy.com to see how many of Michel’s compatriots and fellow language-speakers visit this site.

It appears that visitors from France are the 7th most numerous Visio Guy users, and speakers of the French language are #4, behind US English, British English and German. So you could say the French-speakers are actually #3 if you throw “us” in with the Brits.

For you Visio fans who speak French, Michel’s web site will be a wonderful addition to your feed- or book-mark list. For those of you who had high-school French, maybe this is a good opportunity to practice!