You are here: Home / Development / Code / Path Analysis in Visio

If you’re trying to take Visio to the next level by writing code for custom solutions, then you’ve likely run into some aspect of connections.

You’ll also see how to produce connected diagrams, find out which shape is connected to which, and more importantly, do some path analysis to find the deeper meaning behind it all!

This guest post was developed and written by Al Edlund. Al is a fellow Microsoft Visio Most Valuable Professional (MVP), and is a networking expert, and a big fan of Visio. He’s also told me that networking is also his hobby, so when he’s working he’s playing, and when he’s playing he’s working!

Thanks Al for a great effort, now take it away!

I have seen a couple of recent requests that have focused on how to understand what is connected in a Visio drawing. What is sometimes missed is that there is a difference between connected and a path, which is a series of connections. This path deconstruction is sometimes referred to as graph analysis and is the study of how nodes (vertexes) attach to each other via “edges”.

What is sometimes overlooked by the user who wants to analyze the drawing via automation is that there are two levels of domain specific knowledge that are needed. The first is what is being represented by the shapes on the page and the second is how the underlying add-in portrayed that information.

This led me to a put together a two-part project which you can read about in these pages, and download when you’re done with the words. The project focuses on these two items:

Once you’ve OK’d the VBA macros in the Visio file and clicked the StartTest button on page one, you’ll be presented with the project’s main form:

The path analysis has three sections: the analysis algorithm, the view layers, and the open Excel button. The analysis algorithms create topology pages to demonstrate search techniques. The edge information and path search information are drawn on different layers which can be turned on/off by the layer buttons. The Open Excel feature is included to allow the user to pull in external data. The description of the workbook/worksheets is included in the code module: modDrawData.

The Visio SDK has an example of analyzing a drawing (DemoNavigatingDrawing) which combines both of these concepts (connection analysis and path analysis).

I’ve included a modified version of this flowchart analysis in the drawing. 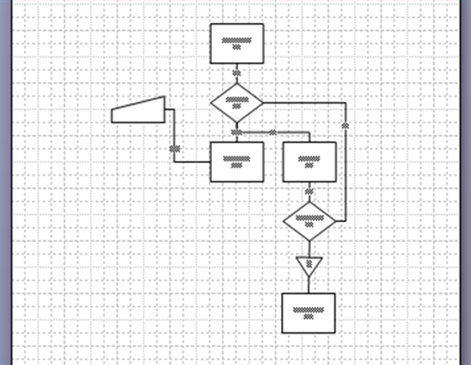 I added these to demonstrate that:

I’ve included a network detail drawing as well which brings out a couple of other exposures. In this case the points that require attention include (once again) that OneD shapes may not necessarily be part of an information flow and (to make it a little more interesting) we have to track connector end-points based on their component and connection point.

Finally in the network connections the paths are assumed to be capable of ‘full duplex’ communications which removes the directionality aspect.

The example of a piping flow drawing (provided by another user) as starting points has three sets of objects we want to track. These are equipment (vertices), piping (edges), and instrumentation (probes). The interesting point here is that a probe attaches to a OneD shape (pipes) in the example drawing. 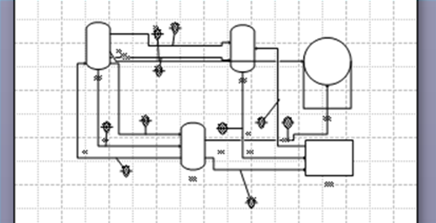 Both the network detail and PFD drawings also demonstrate that you have to be aware of the underlying add-in that created the drawing. In the case of the PFD drawing shape text is stored in a user field.

The captured data from the connection analysis can be saved to an Excel spreadsheet. Excel in this code is 2007 Excel and doesn’t do a lot of checking or error catching. It is there for convenience. 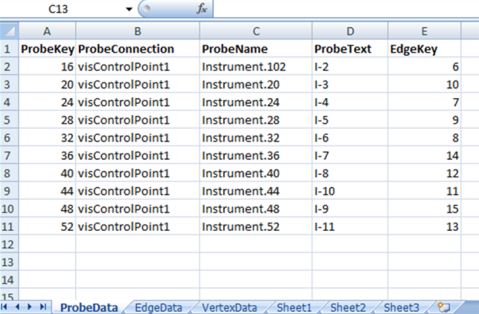 The second part of the project was to demonstrate some of the common methods for analyzing path information. The basic flows are excerpts from Data Structures and Algorithms Using Visual Basic.NET, a Michael McMillan book that was written for VB.NET.

I thought it would be fun to convert the concepts to VBA and then use Visio to draw the constructs and use layering to show how the algorithms worked. The data is based on two mandatory arrays (vertex and edge) and an optional array that allowed me to force some of the shapes to specific places on the page.  A tutorial on this material goes well beyond what an article can cover. Mr. McMillan’s book is also referenced in the code. 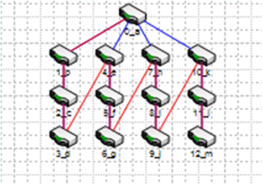 This code should not be considered as anything beyond demo code of some advanced concepts. When you open Visio’s VBA integrated development environment, you’ll see the following forms, modulas and classes: 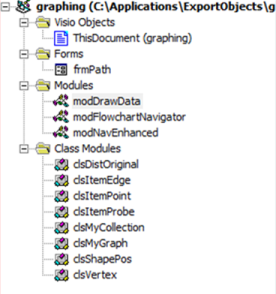 Here’s a quick description of what each code file is about:

Previous Post: « Visio Squircles
Next Post: Wake Up Your Audience With Who Want’s to Be a Millionaire »