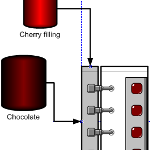 One of the areas in which Visio particularly shines is that of Sales Force Automation. With Visio, a rep can sit on-site with a customer, and visually spec out a system or an installation. The components in the Visio schematic can be linked to real product-data, and can be analyzed via code to generate bills-of-material and reports automatically.

On MSDN, I recently uncovered “oldie but goody” demo that shows off these capabilities. I created it for Visio 5.0, while I still worked for Visio Corp, and it still works with Visio 2003! The demo illustrates how a fictitious candy-manufacturing line might be laid out. Custom shapes represent general classes of equipment, and database links behind the shapes specify real-world items. With the click of a button, a Bill of Materials, is generated in an embedded Excel spreadsheet, sitting right on the page!

If you’re interested in Visio as a sales-force automation tool, or just want to rip apart SmartShapes and VBA code to see how to build Visio-based solutions, then I urge you to have a look at this solution. You’ll find it on MSDN here: Custom Visio Solution: Candy Equipment Manufacturing Example.

Edit: The Microsoft link doesn’t seem to be working anymore. You can download the Visio file here:

The demo comes complete with a Visio Template, an MS-Access database of all the candy equipment (stop lauging!), and a Word document that includes notes on the demo, as well as the Demo Script for walking you a test-scenario.

As detailed on the MSDN site, the elements of the technology that you’ll find in this demo include:

Note: the document contains VBA code that runs when you open the document. For more information on VBA and Security, see the post: VBA Macro Security. When the document is opened, and ODBC data source will be created using the following code:

Nothing show-stopping here, you’ll just end up with another data-source on your machine that points to the local Access database. But I think it’s the right thing to do to inform users as to what is happening to their systems.

Since the demo includes a barely-started system, I thought I’d show you what a completed candy manufacturing line looks like (stop laughing again!) You can see how more equipment has been added to the line. The wrapper, the paper feeder, the conveyor belts, etc. Note also that the Excel BOM has been filled out, and that the user is changing the right-most conveyor belt to depict wrapped candy. This feature utilized custom patterns to generate the repeated graphical elements! 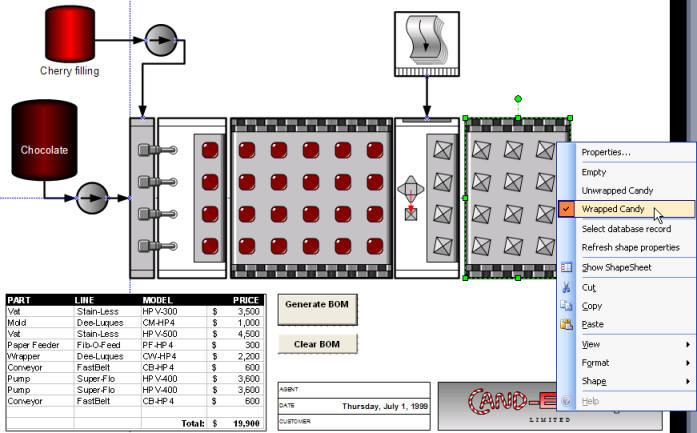