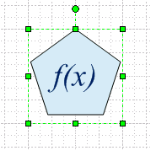 Not only does the new year bring hope, rebirth, and a chance to start anew, but also a new version of Visio. Yes folks, Visio 2007 will soon be on the shelves, and beneath the shrink-wrap and behind the registration cards you’ll find an exciting new feature for ShapeSheet developers: the ability to define your own ShapeSheet functions!

By defining your own functions, you can really reduce the clutter and repeated effortÂ that can occur with complicated ShapeSheet functions.

The syntax for each function is as follows:

But it is easier to understand by showing a simple example. In this case we create a function that returns the square of a number. One cell holds the function, the other cell calls it:

You can see that the named argument: “number” is defined with the ARG function, then specified in the EVALCELL function. For this example, User.testFunction evaluates to 36.

Another way to look at it, for those who are comfortable with mathematical notation, is as follows, where I slowly substitute Visio expressions for mathematical ones. Let’s start with the algebra for a squared function:

Then we make a function cell:

And finally a result cell that uses the function:

Now lets discuss a slightly more complicated example. I’ve created a heavily-parameterized pentagon. On the drawing page, it doesn’t look like much: 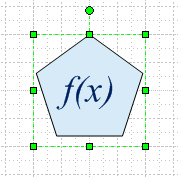 But behind-the-scenes in the ShapeSheet, you can see that there’s some magic at work:

TheÂ ShapeSheet cells are a bit easier to understand if you lookÂ at the following diagram: 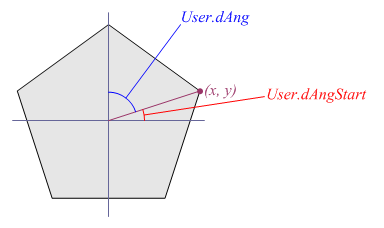 The points (x, y) are calculated such that the center of the shape is also the center of the pentagon, ie: Width*0.5, Height*0.5. We then use trigonometry’s Sin and Cos functions to find the x- and y-distances from this center point.

The starting angular offset, User.dAngStart, allows us to rotate the pentagon so that the first point isn’t due-east (ie: 0 degrees.) In this case, an offset of 18 degrees gets our pentagon to sit right-side up.

The angle for each side of the pentagon is calculated using User.sides and User.dAng. Simply dividing 360 degrees by User.sides gives us User.dAng, the angle-per-side, so to speak.

The cells User.fnPtX and User.fnPtY are “custom-function cells” for locating the x- and y-coordinates of the polygon points. The expressions in these cells contain the ARG() function, and that is what makes them custom functions. ARG essentially parameterizes a formula and makes it a re-usable engine, instead of a fixed formula. For our pentagon, we pass an index to the functions, “i”, instead of an angle. The functions then figure out the angle based on this index, and calculate the coordinates for each point.

Without the custom functions, we would have to copy the formulas stored in User.fnPtX and User.fnPtY to every single Geometry row. Such as pre-Visio-2007 nightmare would look like this:

Egad! You can see that the new version is a lot easier to read than this beast. Plus it has the HUGE BENEFIT of allowing you to change the calculation in a central location. In our smart-pentagon’s case that would be in two formulas — User.fnPtX and User.fnPtY) — as opposed to ten formulas in the old version!

I’m sure you’ll agree that being able to define your own functions is not only COOL, but will streamline your development and debugging processes. Now if we could only get a method to self-reference the index of a ShapeSheet row!