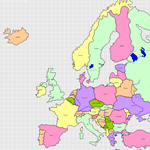 Every once in a while, folks ask about map shapes in Visio. Does Visio have countries and continents? Yes? Well, where on earth (pun intended) are they?

Visio has had map shapes for a long time, but it has become increasingly difficult to find them. First, some of the shapes got moved into the shape database. That means they are no longer in a stencil, but must be found by running a Shape Search. And we all know that search can be less than perfect at times.

Second, the politicians and lawyers got involved. It seems that a few countries are having border disputes. And if poor Microsoft tries to sell anything in these countries that depicts borders not to their liking, they might end up getting sued. Hey, we just want to get our diagrams done!

So I’ve found an old .vsd of Europe that I made before these “issues” arose. I’ve added a few features that you might find useful or interesting:

Perhaps this will allow some of you to find the shapes that you want more easily.

To help the folks out in search land, this drawing contains Visio shapes of the following countries: